Things are moving at a very fast pace in our world right now. It’s an age of instant crisis and instant analysis, as printed news tries to keep up with televised news which is trying to keep up with on-line sources. A worldwide health scare, economic downturns, environmental disasters, political upheaval – every day seems to be another opportunity for “Breaking News” to update us on the latest developments.

As we are bombarded with new headlines, it’s easy to lose sight of issues that will impact our futures.  The spread of a disease or a tornado outbreak has an immediate, devasting impact on those affected by the situation and the impact will linger for days, weeks, or even months.  Fortunately, most of us will recover from the worst effects of any particular incident and lurch toward the next event.

But the focus on the headlines of the day means we are missing underlying trends that threaten to slowly upend our society in the coming years.  Our changing environment as the planet warms is one of those trends, and this issue, at last, is beginning to get more attention.  But there’s another change taking place that receives little recognition outside of legislative committee discussions in State Capitols and conferences attended by professionals.

In the coming years this change will show up in unexpected places – smaller graduating classes in many public schools, last minute cancellations for health care appointments because a physician isn’t available, job openings going unfilled for weeks and months, or difficulties reaching a “real person” to talk to when making a telephone call.  What we’re about to encounter is a demographic change that is occurring throughout the country as our population ages and the unwillingness of our citizens and elected officials to honestly admit the seriousness of the situation and take concrete steps to address it.

It’s not that this crisis isn’t recognized.  The aging demographics of the population of many “developed” countries of the world has been understood for many years.  Western Europe, Russia, and Japan all have populations which have rapidly grown older, and the resulting societal changes have been challenging for families and governments.

The United States is about to embark on a similar path, but entities that must address the reality of an older population aren’t prepared for this change.  Most ominously, our health care and long-term living systems, so critical to addressing the needs of older people, aren’t prepared to cope with a rapidly aging population, and the costs of correcting this inadequacy are staggering.

How serious and imminent is this situation?  In a 2018 report to the Task Force on Private Retirement Security, Pennsylvania’s Independent Fiscal Office estimated that the share of the Commonwealth’s population over the age of 65 grew from approximately 17% of the 12.3 million residents in 2015 to 19% in 2020.  By 2025, their estimate is the 65+ population will be 21.4% of the total while by 2030 the percentage will be 23%. The report also notes that between 2017 and 2025, the raw number of people aged 75 to 84 will increase by 36.1%.  Other states in the Mid-Atlantic region face similar population changes. 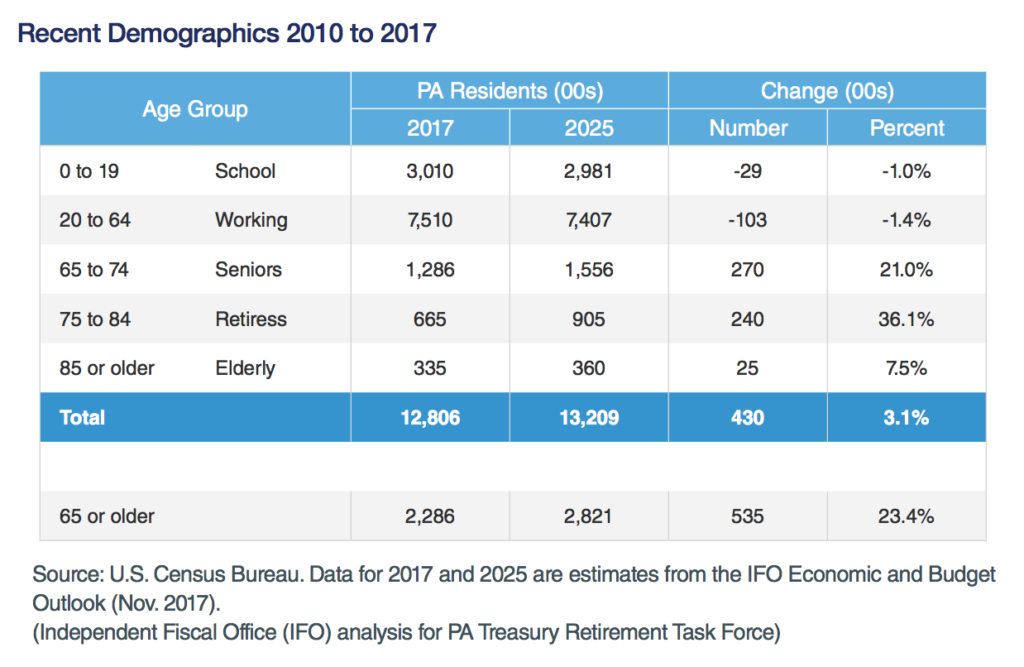 This outlook can be viewed from different perspectives.  There is the glass-half-full scenario, which celebrates the fact that Americans are living longer, healthier lives.  The growth in the older population is certainly a confirmation that  the establishment of the Medicare program has proven to be one of the greatest success stories in the history of the United States.  Adequate and affordable health care for those over the age of 65 has increased life expectancy and resulted in a more active and independent older population.  The challenge of the future is how to improve and expand upon these advances.

A more pessimistic view acknowledges the gains we have made, but frets about the enormity of the challenges.  In particular, the growth of the 75 to 84 population, an age group that is likely to encounter health care and mobility difficulties, perhaps for the first time, is likely to strain available resources.  A stagnant younger population means potential shortages not only of physicians, but perhaps more critically a worsening lack of direct care workers.  Not only will paid workers be in short supply, but unpaid family caregivers, who provide the bulk of day-to-day assistance for aging parents and relatives, won’t be as numerous, as the average family size continues to shrink.

There is one more important factor to insert into this mix of optimism and pessimism.  The older population, like the overall population of the country, has dramatic wealth inequity, and the difference between the “haves” and the “have nots” is likely to increase over time.  For those with retirement income and significant savings, there has never been a better time in the history of the world to be older than 65.  Greater life expectancy, opportunities for travel and leisure, and offerings geared specifically toward older adults mean for this group the old adage of the “golden years” of retirement is fact, not fiction.

But for many other older Americans, retirement is a mirage.  More and more older adults are in debt, some still paying off student loans, others with mortgages and huge credit card bills.  Defined benefit pension plans are few and far between, and if some Americans have been able to save anything toward retirement in a 401k plan, they are at the mercy of a wildly fluctuating stock market.  Many Americans, in fact, haven’t saved anything – they rely on Social Security for most of their retirement income.  With the average monthly Social Security check totaling $1510, this puts these individuals on the edge of poverty.

After all this, however, perhaps the most frightening thing is how little we seem to care about what we face in the future.  The United States is a society that lives in the here and now.  We focus on the latest new food craze and celebrate championship athletes and Academy Award winning actors as heroes.  Our elected officials focus on this year’s budget (and the next election).  Planning for years in the future is rarely the focus of debates among politicians or discussions among friends or families.

But make no mistake – the challenges we face with an aging population are not going to change by focusing on today and kicking the can filled with future dilemmas down the road. If we wait to confront these concerns until the full impact of demographic change is upon us, the solutions will be dramatic, painful, and potentially hazardous to our way of life.  It is time to have these conversations and honestly debate the costs of acting and the consequences of doing nothing.

I hope to contribute to that here over the coming months by examining many of the issues impacted by the aging of our population in more depth.  Only by exploring how we address such matters as shortages of housing adequate for older individuals and the future role of skilled nursing facilities can we arrive at solutions and demand action from elected officials.  The decisions we make today will determine how we as society cope with a changed population in coming years – and it’s time for a sense of focused urgency in reaching these decisions.